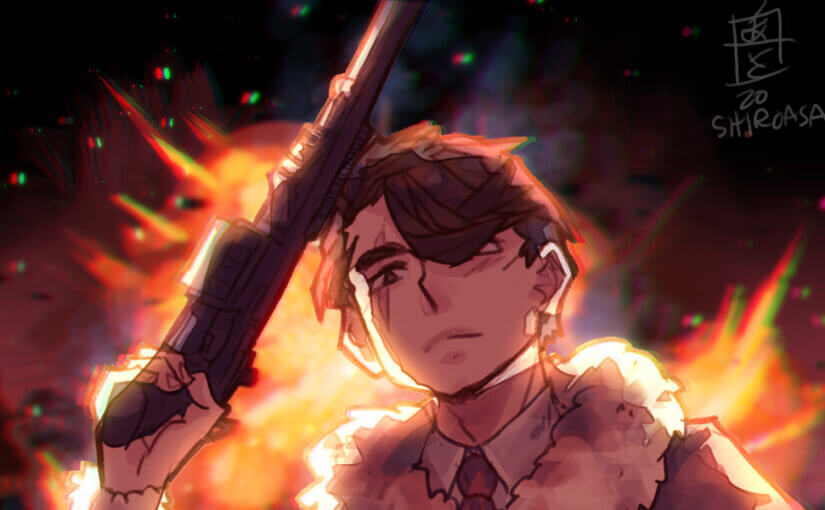 This year was the first year I joined Art Fight. Art Fight is an annual art trading game where people draw each other’s characters (usually) as an “attack,” and the person in question can choose to “defend” against the attack by drawing the attacker’s character.

I had heard about it from a writers’ discord I’m in. My first impression was that people drew each other killing each others’ characters, which I thought was metal as fuck (literally “art fight”) and was excited to find some 19 year old girl’s bunny OC and draw it getting torn to shreds with sixty pellets of lead. When I found this was not the case, I actually felt really disappointed 😅 and thought the entire event was just a lame glorified thing to draw peoples’ OCs.

Well, I did try it anyway and because I’m old and dumb I couldn’t figure out how to attack someone after browsing characters and finding some that I liked. I realized that I hadn’t picked a team, so I figured that out and landed on team Spice.

Now, the pandemic has left me deeply depressed and a broken person since February, I have become increasingly unhinged since then and have lost the motivation to draw and just to exist in general. So I decided, since I was deeply unhappy with myself, I would just use this event to experiment and try to find myself and a style I liked and was comfortable with.

My first art fight I spent about four hours on, I was very proud of it at first, but then as I neared the finish of the piece I become terrified that the recipient wouldn’t like it. And as it turns out, my anxiety was right for once, as I never received a comment or revenge or any recognition of my time. Of course, they didn’t owe me anything. But being apprehensive about this event and myself in general, it truly hurt me and made me feel unwanted so I didn’t want to participate anymore and just resigned myself to give up the event.

I was having a blast for the first three or four revenges. The event had done something that I was not able to bring myself to do: to draw new content and experiment. It was the first time in months that I actually felt like an artist and not a goddamn failure. I felt powerful. I was actually in mania. I was staying up hella late to finish attacks cause I felt so strong. During that time I felt I needed to give my thanks to this site that somehow kicked my ass to actually do something, so I donated $25 and got a little heart next to my name and the ability to change my page’s CSS, so I made it pwetty because I’m a fairy prince goddamnit.

My mania faded due to many reasons. As I got more attacks against me, it got to the point where I couldn’t even draw from my bookmarks because all my time was taken by doing revenges. At first, I was spending 2-4 hours on each piece, it was truly exhausting and I did at least 1 or 2 a day. By my 11th attack it became crippling to continue this amount of effort, especially on styles I wasn’t familiar with, so I dialed it back some and made sure I only spent about an hour on each piece.

By my 20th revenge, I finally had finished all of my revenges and was able to create two of my own attacks. However it started becoming a hydra again in which I would finish a piece and then two more attacks would pop up and keep me in the revenge corner forever. At my 22nd attack I was experiencing burnout and tried to dial it back even more, trying to complete the revenges as fast as possible without taking too much time, hoping anywhere from 30-45 minutes depending on subject matter.

I had told myself I wanted to try to also experiment with drawing backgrounds (which I’m horrible with), but at that point, my focus was just being able to get rid of all the revenges fast enough so I didn’t feel a weight on my shoulders, so I forewent that thought, and it made me feel bad. I was supposed to be learning something but here I was just mindlessly drawing to make a number go down.

By the 31st my burnout was very real, but I had promised to revenge all attacks so I had to stick with my guns. However I realized this was really, really killing me so I changed my profile to only revenging against half body/full body attacks, in hopes that it’s less stressful for me, and if people had to expend more effort to get a revenge, maybe there would be less attacks. Due to some technical issues they had extended Art Fight to August 10th instead of ending on the 31st, I just had to stay alive for ten more days.

I did get to attack one or two more people while I worked on the rest of my revenges, which was nice. In the end, I managed to make a total of 40 attacks, about 4-5 which were my own attacks and the rest that were revenge attacks. I had drawn more finished pieces in a month than I had done in the entire year. After I finished my final revenge I felt a wave of relief rush over me. I was just DONE. Finally. I made a note to never say I would revenge all attacks ever again – next year, I’m just going to choose some that I really like and revenge those instead of revenging EVERYTHING.

It’s also the first time I decided to stop being shy and join a discord server and actually participate in it. So I hung around the Art Fight discord and tried to make friends. Well… that was harder than I thought, because I don’t feel like I can connect to anyone… a lot of the people in art fight are teenagers or in their very early 20s, they have a totally different life than me so I feel completely out of place. It makes me feel isolated because I feel too old to hang out with these kids but at the same time I feel like the artists my age actually have their shit together and are Good and I’m not Good Enough to hang out with them. I don’t really know how to make friends, so this entire ordeal gave me a lot of anxiety. I wish I could more easily meet and talk to artists in my age group.

And. Speaking of young kids. Throughout art fight, I became increasingly insecure as I weighed myself against young teenagers who grew up in the age of the internet and had all kinds of resources to nurture their talents. Meanwhile when I was 16 the only thing we had back then were some anime face tutorials on DeviantArt. I have never had a support group or artist friends until my very late 20s so my art journey was stifled for almost two decades due to my own seclusion. I tried not to feel bad about how good these kids were and how much better I should’ve been at my age, but I also kind of had a mental breakdown over it? It’s tough and I’m trying to slap myself in the face and not worry about the things I can’t change, and only grow to be better.

In light of my increasing despair over my age disparity versus my art skill, let’s talk about some positives from this event. I studied during the month of July and learned to actually, properly draw eyes and lips (whoa!!) because I had never learned such fundamentals as a kid. As such I feel better about the way I draw faces! I also discovered a new way I like to colour (when I’m not rushing to completion) is by licking my colour wheel and spitting on the canvas with reckless abandon.

I shouldn’t be so hard on myself. But my goal is to get awesome as fuck so I can participate in Art Fight 2021 without feeling ashamed of my pieces.