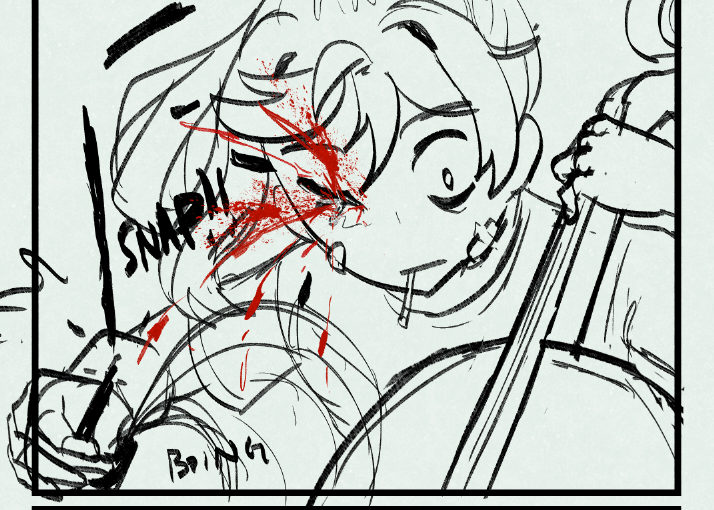 Earlier this year, I came in contact with some artists who had mild success with original art. I pretty much only buy original art at cons, I’m not very interested in fanart so that’s something I was happy to see. I regained a little hope, thinking, “Well if they did it maybe I could try to do it again? Right?” And I quavered with uncertainty. “Ah, well no one would buy it anyway. Look at my comic.”

It took some encouraging from several friends to take the leap of faith- I made charms for a product line I’d like to start, for my humour comic Boys Outta Luck!. And honestly, though it was very difficult, I have never been happier in my life to be able to bring this idea to fruition after swearing off original art. I have never been someone who likes drawing fanart. Pretty much all fanart I’ve drawn was because I have become enslaved to it since I believed it was the only way to get people to care about my art. I’m not saying my fanart is deliberately shitty but I was told it was very obvious how much effort I put into my original works vs a fanart work, lol. And that’s the thing, I don’t like drawing fanart because it’s not something I own, I feel immediately disconnected from the art because I do not own the character it’s from. I’m just doing a reimagining. (Unless I’m doing fanart for someone’s webcomic – then fuck yeah, I love doing THAT kind of fanart)

It’s not that I hate the character, I just can’t be emotionally attached enough to draw art of it cause it’s not mine. Pretty much every fanart piece I’ve made has just been one long, unmotivated struggle to draw The Popular Shit so I stay vaguely relevant. Like I /LOVE/ BNHA and Jojo but drawing merch of them? Holy shit, I wished someone would put a bullet in my head. Furthermore, even if I WANT to make some merch, I feel like I have to do fucking calculus when it comes to seeing what anime will stay popular and won’t be a waste of my time to make. I threw out so many ideas for merch because it just came down to “well I liked this but it’s unpopular so no one will buy stuff i make of it” Which…happened with a winter anime I had watched and I felt sad as it faded into obscurity and the time I spent on making merch for an anime I adored just vanished into a black hole. So when I had the slightest hope that I could possibly, actually, really sell things that /I/ made, i couldn’t help but feel my dead soul, shackled to fanart, get a little less dead. I mean, unlike anime, my work will never fade into obscurity because it’s not popular anymore – so I already was foaming at the mouth at not having my work selling… once… and then being replaced by the assembly line of next season’s flavour-of-the-month waifu.

For a long while I had been increasingly miserable at the state of my being and extremely depressed. I’m not creative enough to make sellable/marketable items or art, I just want to fucking draw comics. So the only way to make money was to sell mediocre fanart, but I felt my soul die every time as I found myself spending less and less time on working on my own projects. I decided I was going to quit cons after Anime Midwest since my “brand” wasn’t getting anywhere – my “brand” was “guy who makes mediocre fanart” when I want my brand to be “guy who draws cute boys in emotional distress.”

But at ACEN I met the absolute nicest, sweetest, and very talented artist I’ve ever talked to who convinced me to not give up and just keep working on branding myself. I’m still a little scared to continue, but that pep talk along with a couple people excited at the premise of my sadbois comic kickstarted my motivation enough to finally start drawing said sadbois comic. 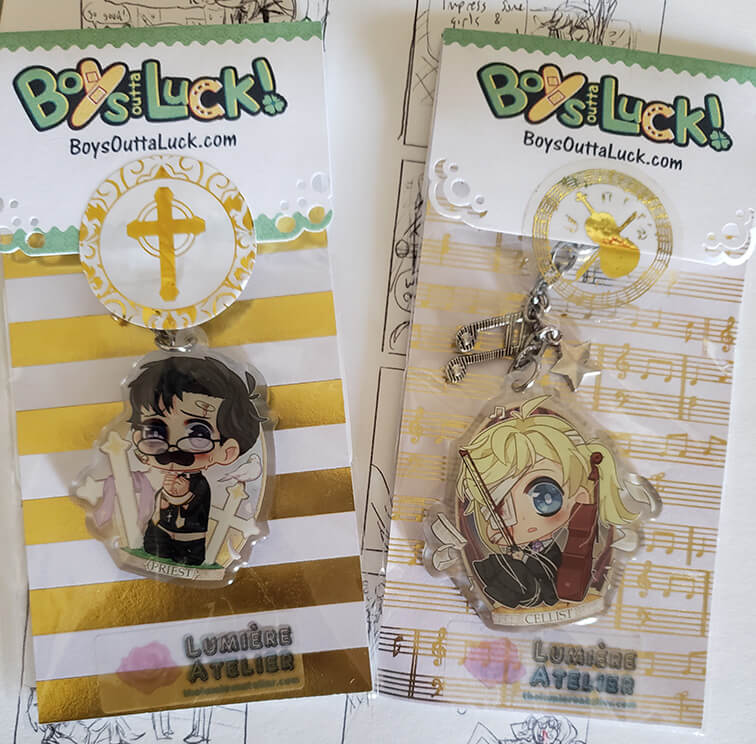 At ACEN, to no one’s surprise, pretty much everyone ignored the pretty packaged charms on the table that I had slaved over to make perfect, and just looked at my mediocre fanart. I did get a couple people question my OCs, and when I explained the promise of my sadbois, I apparently was passionate enough about my love of OCs and sadbois that I managed to sell some charms. I honestly could not be more happier that someone was interested enough to buy work of my own characters. I sold a shirt of Priest-kun too which I pretty much screamed thank you repeatedly at the buyer. 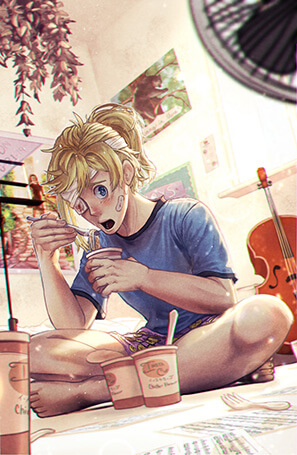 I had added two of my original posters to my lineup at ACEN solely because I didn’t have enough art to cover the top (lol). I knew no one would buy them but I needed to cover the space. Surprisingly, I actually got a lot of comments on my Cellist picture which made me happy. It made people interested in the character and they wanted to know more about this poor boy.

I want this to mark the rekindling of selling original works at my table. I don’t know if anyone will be interested in them, not sure how many people are into sad and beat up boys. But just getting those couple sales of my sadbois filled me with immense joy. It means that someone liked my original so much – more than their favourite anime character that’s probably cheaper to buy – that they spent money to buy my work. MY work. Not my rendition of someone else’s work, but a creation that is /MINE./ And that brings me more happiness than you could imagine.

TL;DR: I made original charms after being enslaved to fanart for three years and considered quitting cons for good because I was becoming more miserable as I strayed farther and farther from my original goal. Was convinced otherwise because people seemed to enjoy the premise of my sad boys and now I want to work towards building my brand with my comics again and not with shitty fanart.