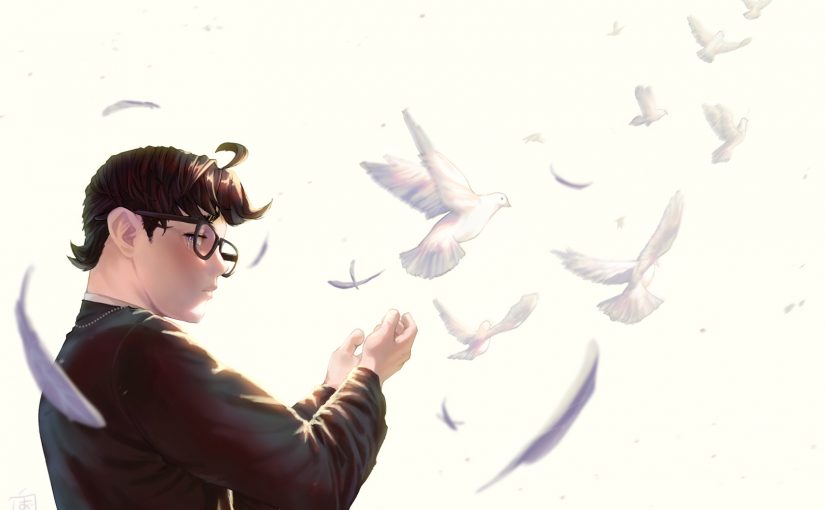 Here we are again. Round two. Or how many rounds is this? It feels like I’m in a circus, performing the same tricks go over and over again for an audience.

But I don’t want to do that anymore.

That’s why I’ve chosen to delete my Patreon, discord server, and everything else that I managed.

I can trace this entire debacle back to the moment I first thought to myself, “hey it would be really cool if I could monetize my artwork!”

It was a mistake I didn’t know at the time.

Maybe that works for other people. I thought it could work for me. But it didn’t. Instead, it just tortured me for far longer than I would’ve liked. The constant obligation, the need for validation, the desperation for seeing numbers, it’s not worth it. It never was.

Long ago, I was a capitalist wage slave like everyone else and I worked in normal job and got my salary like normal people. I was a miserable then so I quit my job to work on my comics. I didn’t have any income, but I was doing something I liked.

I tried to monetize my comic a bit when I found out about Patreon, but at that time I didn’t include anything that I wasn’t already doing. So there was no extra work for me. No sweat off my back. Made like $15 a month, hey better than nothing. Then, a few years later I remembered that anime conventions existed. I decided that it would be a good opportunity to promote my comic at one. I assumed I probably wouldn’t make back table cost – and I didn’t – but as long as I reached people and got them interested in my work, it was worth it.

Since I was unemployed, it was a big dent in my wallet to go to a con to advertise, so I thought, “well, maybe if I just draw some fan art it will help me bring people to the table and cover the costs.” So I did. I made some fan art, and I did end up covering the cost of the table the next time we went. I was like, “wow cool! I advertised and made a little profit :)” which was pretty neat right?

Soon, the fan art take over my entire table, and my original works were left in a little corner that people avoided. But it was all right because I was making money, right? I was finally making money off of my artwork! How cool is that? Doing the thing I like, for money?!

So I kept doing it. I got a profit. I reliably paid my bills and had money to spend on things I liked. Whoa, that $12 washi tape I wanted? I could get it now without feeling (as) guilty! I bought fast food once a month! How bourgie of me! But at what cost?

As I started getting into the business side of things, I knew that social media was ‘the thing’ I had to focus on, because that’s how people get seen these days, right? To keep generating money I had to cultivate an audience!

And here’s where everything truly turned to shit.

Before, I owned a small, shitty-made blog where I posted my artworks and my thoughts, rants, what I ate, etc. You know, general bullshit. It was just a corner for myself. I didn’t know if anyone even looked at it, I had no stats, like two of my friends probably saw it. But when I posted there I wasn’t expecting anything, I just posted to a void and expected no one to see it. That’s how it was for over a decade. I made artwork for myself and didn’t care if zero people saw it. It existed on my blog for shits and giggles. But once this all happened, I abandoned my blog to go to social media.

There, I began to obsess about numbers. Followers. Likes. Retweets. I needed to be seen to have my business grow. After all, this was all about my business. My art became focused on growing my followers in my business. I frequently would scrap ideas that I liked – maybe only I would enjoy it/understand it, maybe it was a shitpost – because I would just think, “But will this art further my goal? Will it help me get followers? Will it help grow my business?”

I stopped doing art that I liked and tried to focus on things that other people liked instead. Not me. I needed those followers! I spent less time on my own creative works to draw more fanart that I thought people would like. After all, that’s the only reason anyone came to my table anymore. Original works weren’t getting me any money, so they got to sit on the sidelines.

I also went hard trying to monetize my Patreon and give people reasons to pledge, so I started making tiers where I’d do extra stuff in addition to just making comics which already was enough on my plate in combination of making merchandise, attending cons and managing social media among other things. More and more things piled up on my plate and I became more disillusioned with this world I had created for myself.

I decided to turn my Patreon into a tip jar since I was starting to get major burnout from everything that was going on (so I couldn’t deliver any rewards), but that lasted like… a month? I couldn’t live with the guilt of just accumulating money by doing… nothing. I’m not the kind of person who can just take money, I have to always give something in return or it weighs heavily on my conscience. Furthermore I wasn’t even sure if I could deliver anything ever again with my creativity bankrupt so it felt like dangling a carrot on a stick that may never be reached, I didn’t want to feel like I was tricking anyone.

Meanwhile, I started to despise cons; the only thing that mattered was fanart, so I became embittered at any compliments since all the fanart wasn’t really “mine.” When people said, “oh I like your art!” all I heard was “I liked that you drew my favourite character in your style. I don’t like your art (the stuff you like to make).” I hated being there. The money was cool, but every time a con came around I dreaded going and would be in a bad mood the entire weekend. It was just a slog, a job, no different than the jobs I worked years before, except I was my own boss that got to make me feel like shit, I had no one else to blame. I’d fallen into a hole. Art wasn’t fun anymore. It was tiring. Everything I made was a chore. I had to make sure all my art had a purpose; if it didn’t make me money, what good was it?

I had first decided to stop posting to social media because I saw it was damaging me. It worked for a bit, but then my anxiety came back because I decided something else later on: to not draw any fanart anymore because I knew it was making me unhappy. I also know I’d be starting from ground zero again, selling my original works, but I’d rather build up my original ideas than deviate to the fanart path again. So that made my brain go, “But if you’re not posting to social media how are you gonna cultivate a following to sell original works to?!???!” So I started trying to post again.

But once again I saw the numbers game bubbling up inside of me. No more! I can’t take this anymore.

I was so tired of playing games! Managing things, talking to people, throwing away ideas I liked just for the sake of business! I’ve been so miserable for the past two years. I’ve fucking had enough. Yes, enough was enough. All I wanted to do was just draw comics, what the fuck happened to me?

I’m not destined to be a popular artist or salesperson. I just want to sit in my hole, shit out a comic and fuck off, interact with nobody, be beholden to nobody, have nothing be expected of me.

In theory, all my ideas were good! I enjoyed delivering content for people, coding systems for myself and indulging in ideas to have fun with fans, but I, as a singular, very mentally ill person, cannot handle the responsibility that comes with all these schemes and ideas I think of. I barely can even take care of myself! I’ve lived the past year in a numb haze, simply existing, I spend every week wanting to just fucking die, how the hell did I even manage any of this?

If I was mentally stable, I would like to try it again, with more organization, structure and knowing my own limits! But I’m not and I don’t really think I ever will be, so it’s just a pipe dream. Because I know the moment I start creating things to an audience I can “see” (e.g. follower count on social media), I will start worrying about numbers, attribute my self-worth to the amount of likes I have, and then this entire fucking clown performance will happen again.

So I have to knock the castle I built down. Existing nowhere in the internet is better than curating my entire existence to some online persona where I only make art that people like and isn’t going to offend anyone or whatever.

I just want to be me and do things I like without constantly weighed down by my own overly-grandiose ambitions.

All I do is dream, but my dreams have to end at some point, because dreams weigh less than reality, and my shoulders aren’t strong enough to carry all this crushing weight. I’m stopping all those stupid dreams, now.